I am still sharing little snapshots as things come to me and my brain triggers. Look out for these they usually spill onto Instagram. I am going to load some of these on the blog at some point too.

The day we were due to tour the compound was Jum’ah (is a congregational prayer (salah) that Muslims hold every Friday). There was a buzz in the air and we were told to make our way into the compound early to get a space. Women pray in the Dome of the Rock and men head to Masjid Qibli. This leads me to highlight a very important/heart breaking fact about Al-Aqsa Masjid. It is one of the three harams we are told to visit by our beloved Prophet Muhammad May peace and blessings shower upon him:

“Do not travel to visit any mosques except three: al-Masjid al-Haraam [in Makkah], this Mosque of mine [in Madeenah] and al-Masjid al-Aqsa [in Jerusalem].” Narrated by al-Bukhaari, 1189; Muslim, 1397.

Yet Masjid Al-Aqsa was literally empty aside from Jum’ah salah. Can you imagine being able to take a picture of the Ka’aba without anyone ‘standing in the way’? No? Why is it possible at Masjid Al-Aqsa? I know they’re restrictions for the local people, but what is our excuse? 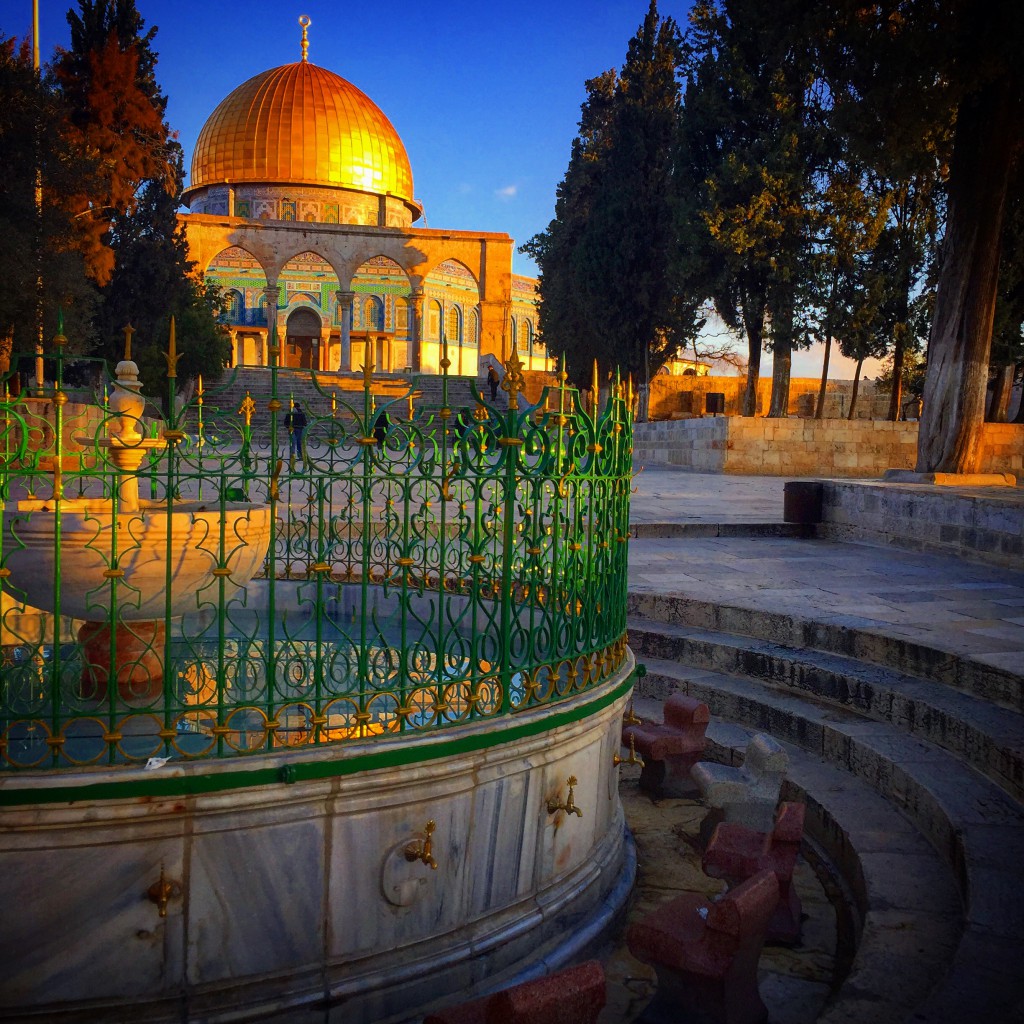 Many people are worried it is not safe, that is false as it is as safe as anywhere else. If you are worried about something happening it can happen anywhere, including what you think may be the ‘safety’ of your own home. Take a huge gulp of Tawakkul (complete trust in Allah) and Go! Go! Go! You really won’t regret and come back in love with a country so rich in heritage from all three Abrahimic faiths that you just want to go back over and over.

One thing every local person we met said. “Tell your people to come, we need you to keep coming. If you don’t we will lose all of this”. This rhetoric was repeated to us over and over again. “We don’t need money, we are content. We need you to come, visit this beautiful Masjid, prove that it is ours.”

We prayed Jum’ah but something sad became apparent for me at this point, I have decided I will be covering this on the blog soon In-Sha-Allah. I won’t deny I cried in every salah there. I could just not fathom where I was stood. I felt at home.

Before I continue, I wanted to highlight something important; KNOWLEDGE!

Research, learn about the Prophets and Sahaba’s who spent considerable amount of time in Al-Quds, the grounds of Al-Aqsa and the country. Do research on top of your research. As we know many different stories are told and many different versions from people of many faiths, historians, archaeologists and the list goes on. The important thing is to be able to look at everything and make a sound judgement based on Islamic teaching that we all have access too. You will really appreciate every step you make if you do this. The importance of every footstep, every visit, everything you see, will just fill your soul with love. The love of deen.

Abdullah bin Amr narrated that the Messenger of Allah (saw) said: “When Sulaiman bin Dawud finished building Bait Al-Maqdis, he asked Allah for three things: Judgment that was in harmony with His judgment, and he was given that. And he asked Allah for a dominion that no one after him would have, and he was given that. And when he finished building the Masjid he asked Allah, the Mighty and Sublime, that no one should come to it, intending only to pray there, but he would emerge free of sin as the day his mother bore him.” (Sahih)

The afternoon tour of the compound began. I mean, come on who would not want a day spent in the beautiful company of the Dome of the Rock, we were excited to find out more about the place we have all spiritually and emotionally connected with.

As we went underground of Masjid Al-Qibli and sat around our guide. We were asked so ‘how many Prophets outside of when they were all here being led by Prophet Muhammed SAW visited Masjid Al-Aqsa (Farthest Mosque)?’ To which people nervously looked to answer. Sulaiman AS was mentioned (as an obvious choice) to which the reply was ‘nay’ and an explanation of it being a common myth followed; the hadith where Prophet Sulaiman AS made three du’as was also refuted as not a strong hadith. Suddenly the faces of everyone became aghast and looked at each other puzzled, the spiritually of the journey was being sucked out as we listened, to the point where I felt that it is merely bricks and mortar and nothing of great significance. This really troubled me. Although I still questioned my own research and did not have the courage to stand up and refute. Ashamed I did not feel confident in the knowledge of my own religion to be able to challenge what I knew in my gut was wrong, and totally dangerous rhetoric to be passing on to all the people in my group. 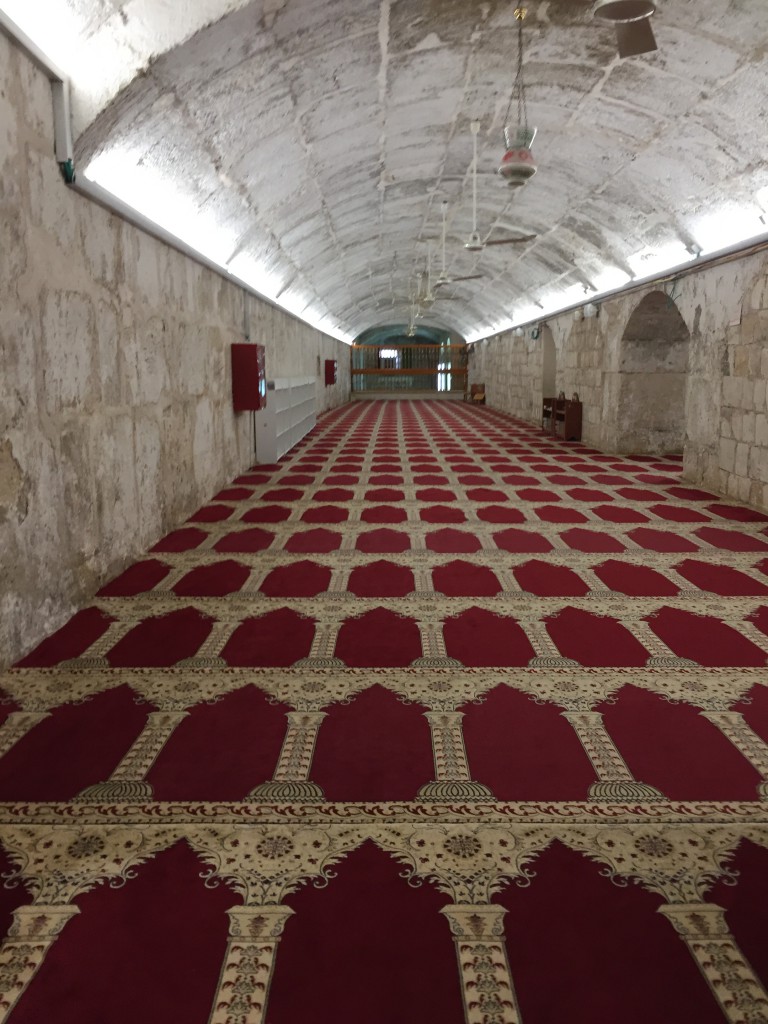 We headed up to Masjid Al-Qibli for salah at this point I walked over to the Shaikh who was with us and made my feelings clear. I was not comfortable with the tour guides version of events. The fact a sahih hadith was refuted in front of my eyes, in fact the claim that Prophet Sulaiman did not ever step foot on the compound left me dumbfounded. I requested that for the groups sake this needs to be corrected as it is dangerous territory. At this point I was really hurting inside questioning what had happened, why it had happened? Was my research and the significance of where we were; wrong? I decided to bow down in sujood and ask Allah for guidance, I asked for guidance, I asked if I am wrong please guide me to show me the correct path. If I am correct ‘Rabi Zidni Ilm’ Ya Allah grant me the knowledge in order to put right what is wrong so we are guided to the truth. Allah forgive me for my shortcomings and guide us all including the tour guide to the correct path. Before I had even got up I heard some shouting. I did freeze a little on hearing this, all types of thoughts going through my head. Then the call to start salah rang through the Masjid. When leaving the Masjid, it took me a little longer and the group had already left. At this point my friend, brother and father came up to me said a man shouting had come up to them kissed them on their hands and shoulder out of respect and requested they move forward and pray in the first row. He dragged them as far forward as possible and then left with them. They did not know who he was. Upon leaving the Masjid he made a b-line for the tour guide and demanded to know why lies were being told to the group and how they are a good person but should be very mindful what is being said. This created a large commotion as things got a little loud and heated. After he was calmed and left. This seemed to reoccur throughout the tour with various people questioning the guide which were not part of our group. At that point, I took the time away from the tour to stand up in Salah and read 2 raqah nafl prayer for shukr. I felt I had got my answer. Many others in the group also started to notice the difference in opinion.

During the tour, it came to our attention that the hair of Prophet Muhammed SAW, only 100% confirmed hair of the Prophet Muhammed SAW is in the Dome of the Rock. We walked over and offered salutations to the Prophet SAW in unison. This was an amazing feeling. Knowing how much the companions of the prophet cherished even a bead of sweat of the prophet. It further cemented how important the land we are walking on and praying on is. 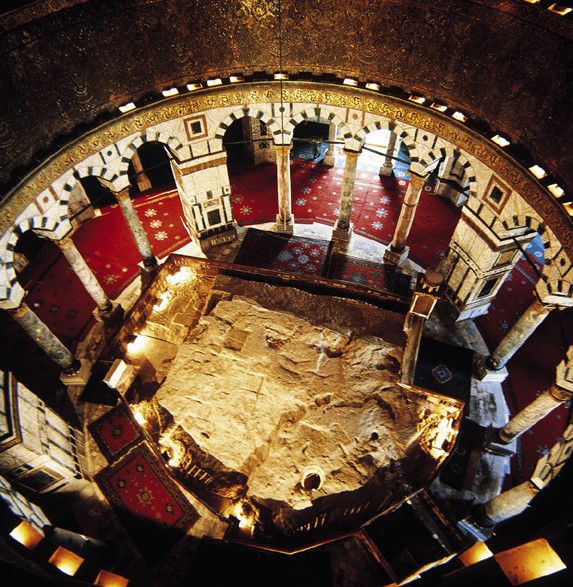 That evening back in Hashimi Hotel we had a lovely meal (the meals these guys provide were top notch!) the owner came by and talked about why he moved back to Jerusalem after having successful business and life in America. He talked about the love he has for his country. He reiterated “Please tell everyone to come, we need you to come!”.  We all listened to his story intently with tears in our eyes as he spoke about the love of his deen, the love of his people, the struggles of the people. He spoke about the importance of vising and the spiritual importance of where we are sat. The hadith came up again where he highlighted how authentic it is. This made me think I wonder if the rest of the group have realised what he has highlighted again.

Abdullah bin Amr narrated that the Messenger of Allah (saw) said: “When Sulaiman bin Dawud finished building Bait Al-Maqdis, he asked Allah for three things: Judgment that was in harmony with His judgment, and he was given that. And he asked Allah for a dominion that no one after him would have, and he was given that. And when he finished building the Masjid he asked Allah, the Mighty and Sublime, that no one should come to it, intending only to pray there, but he would emerge free of sin as the day his mother bore him.” (Sahih)

In my heart, I knew Allah has granted my du’a subhanAllah. I turned to my friend and requested that he thanks the owner for parting his knowledge and experience with us as earlier we were advised differently and left us quite confused. Highlighting led a member of the group come over to us and say ‘thank you, I was struggling to understand what had happened today, it has made me question everything I heard and I will now go and seek knowledge of my own’. Alhdumullilah the day ended with each part of my du’a being granted.

Lessons I took away from this part of the experience was ‘SEEK KNOWLEDGE’, ‘BE CONFIDENT IN THE KNOWLEDGE YOU POSSESS’, ‘CHALLENGE YOURSELF AND LEARN’ but most importantly when needed seek guidance from Allah. He surely listens and will guide you as long as your intentions are sincere.

Lastly I invite you to go, accept the invitation of the people and go! Make the intention today…May Allah accept your intention and take you there. Ameen.

I travelled with Zaarvel Travel.