As we set off to Bethlehem we did not know what to expect. We had seen online reports and read the stories about Gaza, Hebron and other occupied territories but we knew being there would be a very different thing. I was really keen to see what was really going on and get stories from those living in the areas affected. I was lucky enough to experience Jerusalem the third time and we had been to Nablus to visit a couple of days before, which I will cover too. Next stop… 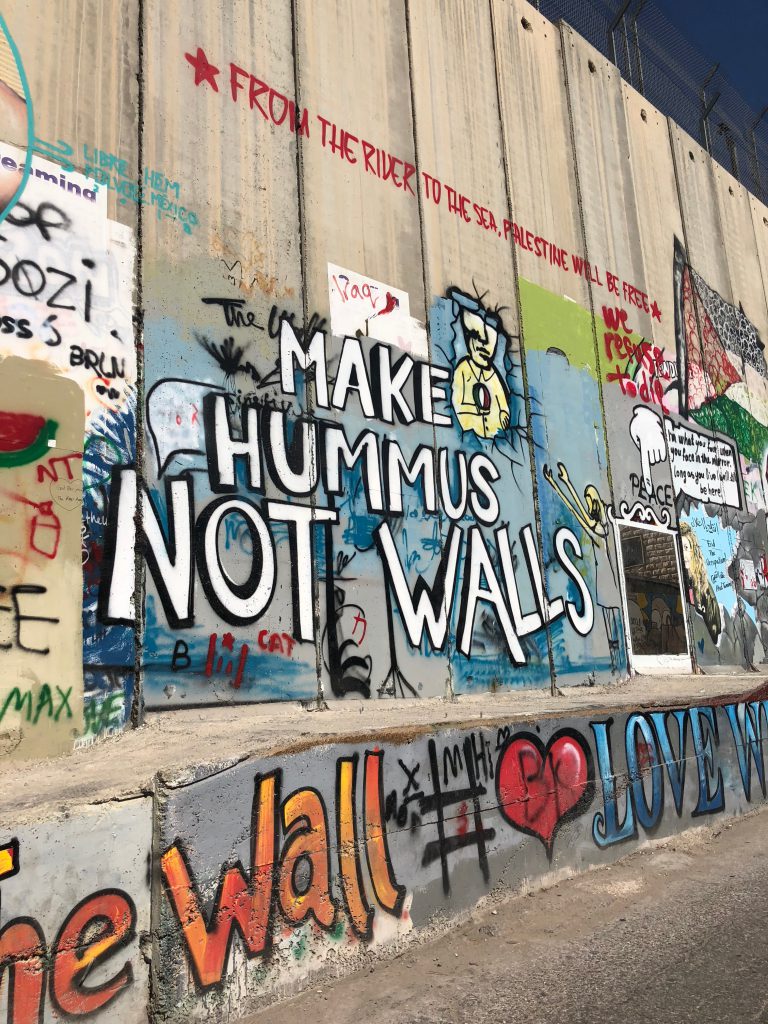 …Bethlehem, we firstly stopped off at the famous apartheid wall, separation wall, security wall – whatever you want to call it – my opinion is (for what it’s worth lol) any wall that is built between societies or people is a block to any intelligent conversation to broker any peace, there is no logic building a wall and then saying, ‘we are ready for peace talks’, you cannot antagonise a situation and then claim to be the solution, just look at history and there is plenty of examples, where situations like this have resulted in peace and situations like this have resulted in the most inhumane and barbaric treatment of people – FACT! – we have intellect as humans and we need to be wiser and learn from generations before us. I do feel we don’t learn in all countries and all walks of society and at times I do wonder if we are just regressing in terms of how we co-exist, as technology advances and life around changes to what most would deem as an easier way of living compared to times of past, the mindset of people, hmm I question, is it becoming more open? or are we just going back to a time when we were just narrow-minded and less tolerant of different?

Israel began building its separation wall in the occupied West Bank in June 2002, claiming that it was necessary for security. The wall, which has drawn international condemnation, cuts deep into Palestinian territory and has resulted in the confiscation of large swathes of fertile Palestinian land, the ghettoisation of Palestinian towns and villages, and has cut off thousands of Palestinians from social services, schools, and farmland. In some places, the separation wall runs along the Green Line, but most of its route lies inside the West Bank – sometimes by many kilometres (when completed, the wall will be more than double the length of the 340 km-long Green Line).

The Green Line is a term that emerged in the wake of Israel’s establishment in 1948, whose proper name is the 1949 Armistice Line. It refers to the border separating pre-1967 Israel from the occupied Palestinian territories, and constitutes an internationally recognised border. 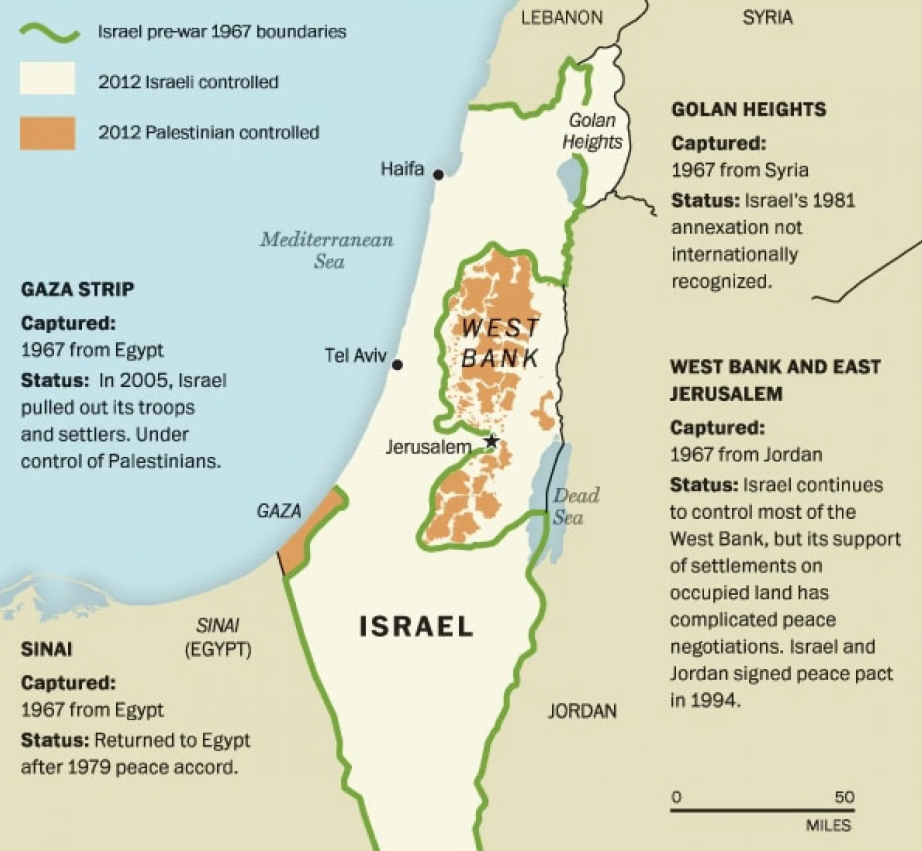 On July 9, 2004, the International Court of Justice ruled that construction of the wall was “contrary to international law” because it involves the destruction and confiscation of Palestinian property and imposes severe restrictions on Palestinian movement. Further, the Court stated that Israel must “cease forthwith the works of construction of the wall being built in the Occupied Palestinian Territories, including in, and around East Jerusalem,” return seized property and compensate Palestinian landowners whose interests have been damaged by its construction. To this day this has not happened but the opposite.

This particular spot of the wall that we visited in Bethlehem is well-known due to British graffiti artist Banksy making his stamp not only on the wall but opening his satirical hotel ‘The Walled-off Hotel’ in the area. I walked up looking at the clever graffiti that had been placed on the wall. I started at the Banksy Armoured Dove of Peace, 2007

Banksy’s Armoured Dove is one of the nine images painted on the West Bank Wall as a way to criticise the Palestine-Israeli conflict.

This artwork has created many controversies in Palestine. Some people hate this image, as evident of the many bullet holes surrounding the doves’ head. 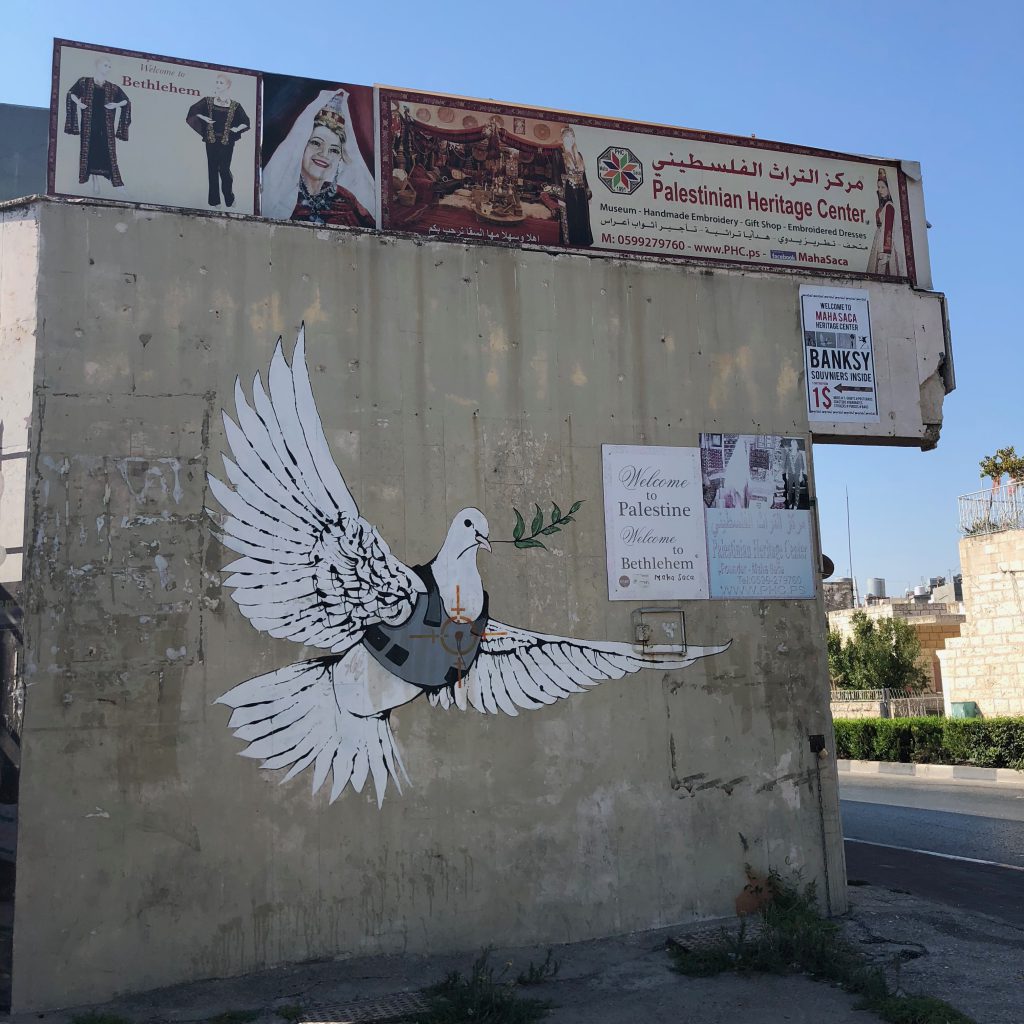 As I walked up to the watch tower which begins the walk up to the hotel, I paid close attention to the little bits of art that had been left behind, messages of support, hope and awareness, as well as satirical pieces not only tearing shreds into the politics of that region but around the world. It looked different to just over a year ago and it really showed the way politics had shifted in the world had now been portrayed on the wall. 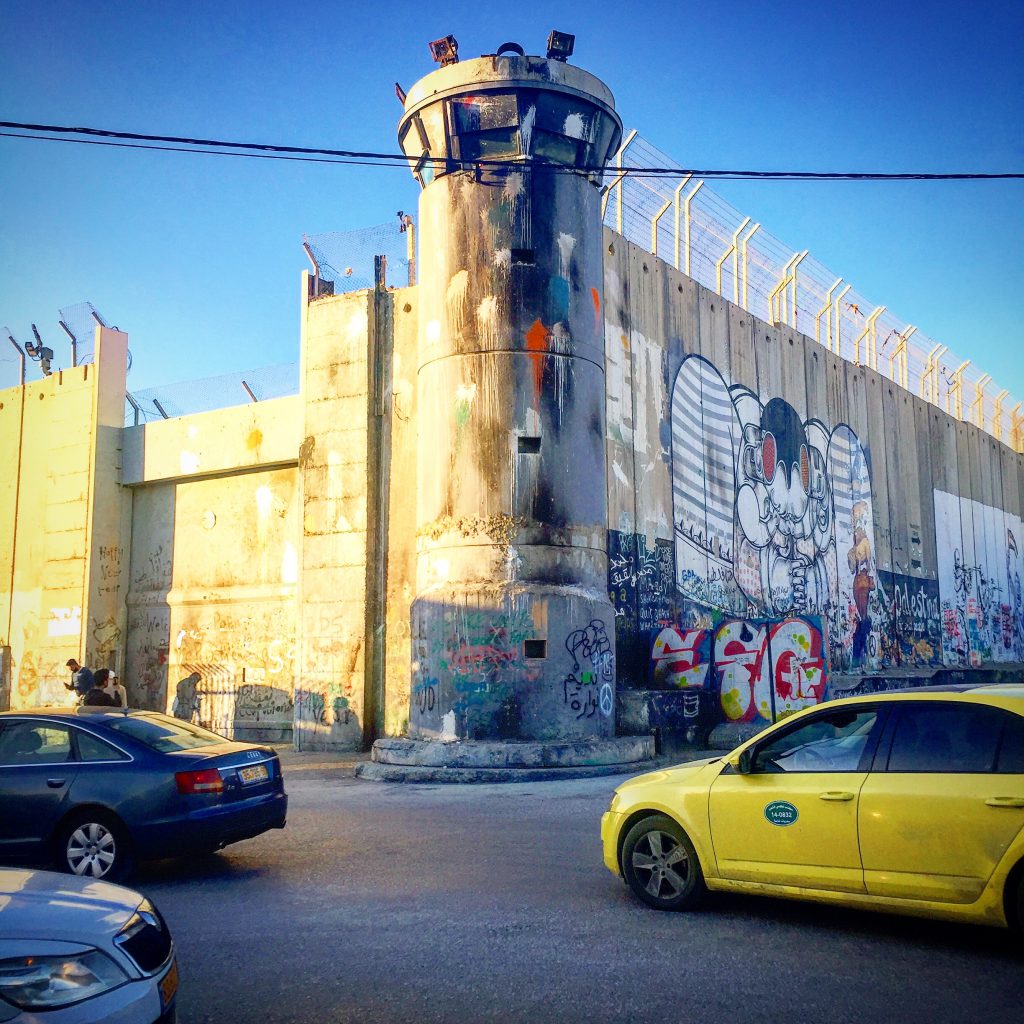 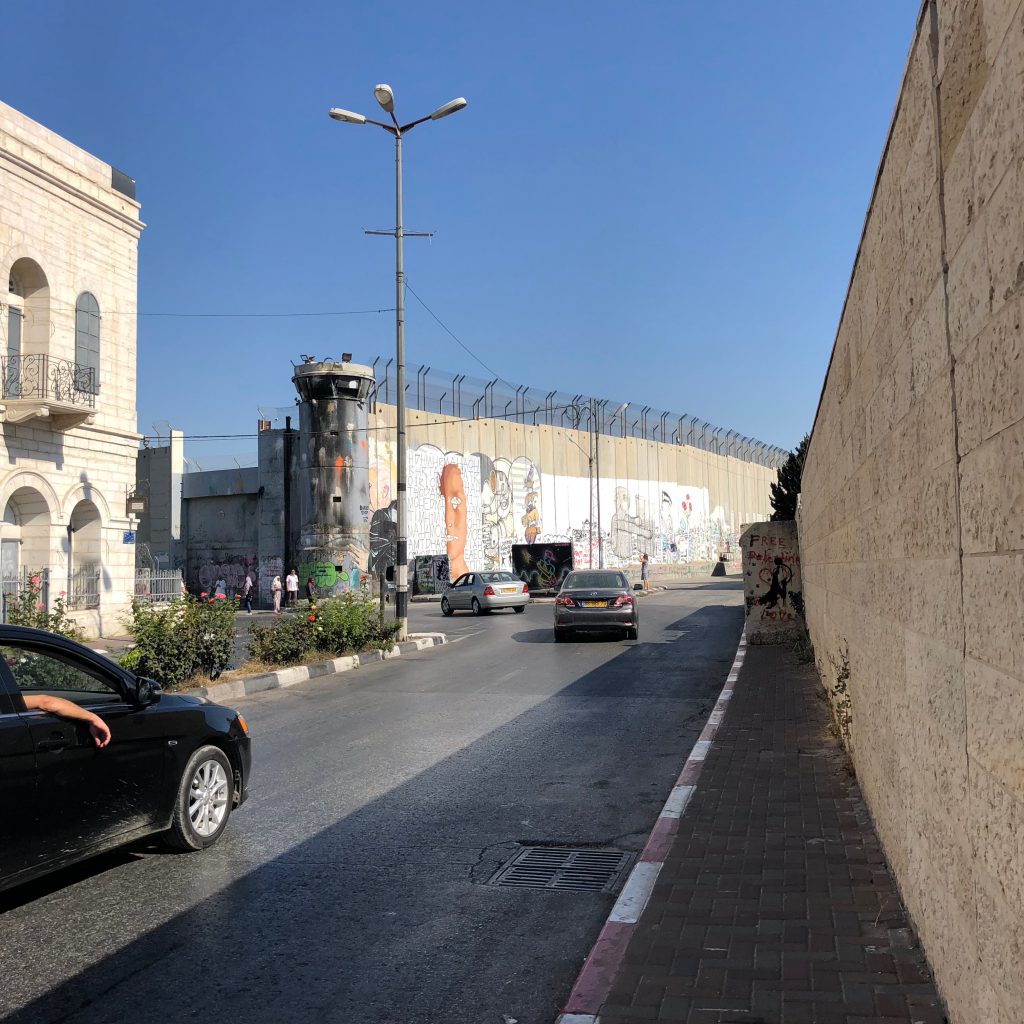 Some of the most famous art that has been placed on the wall aside from Banksy are from artists @Lushsux and @Jorit.

@Lushux graffiti art has been seen in media across the world, he has painted the Trump related meme-based art on the wall in Bethlehem, a street artist from Melbourne, Australia. 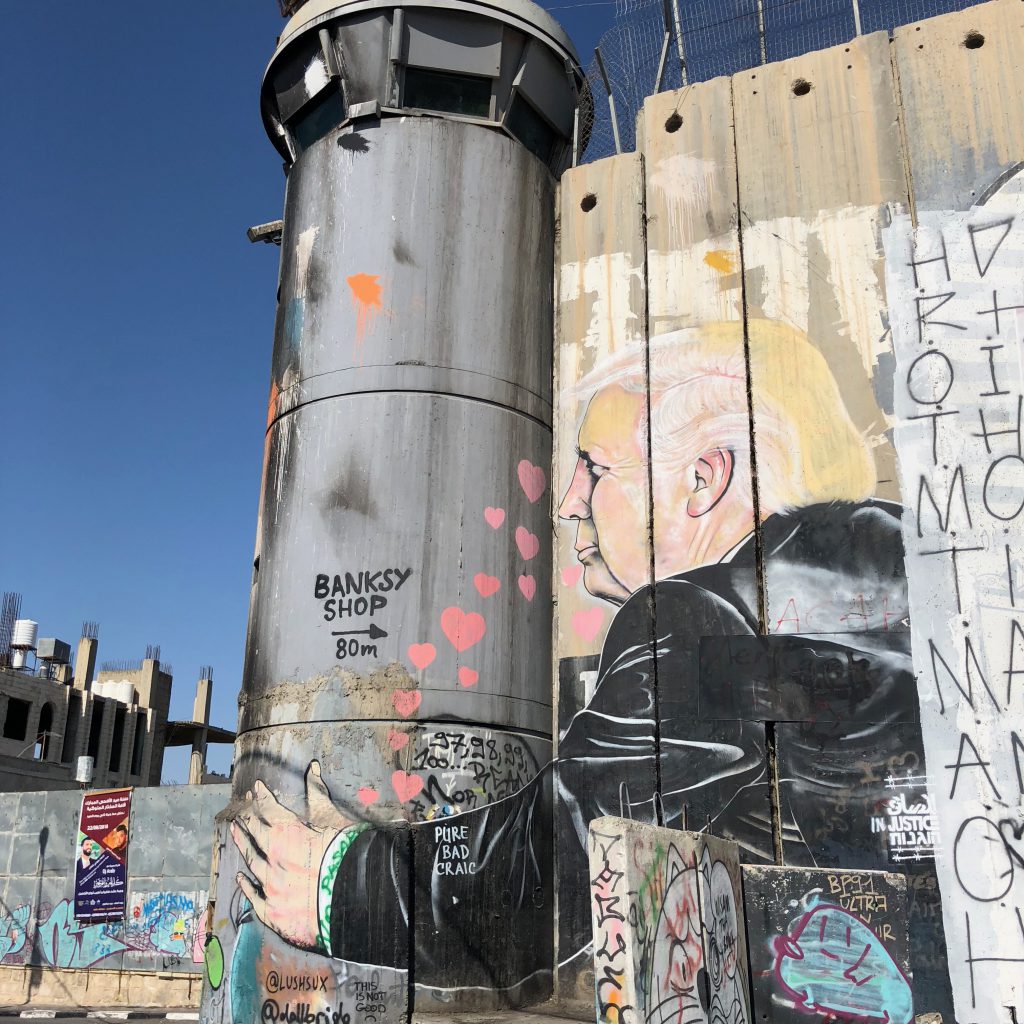 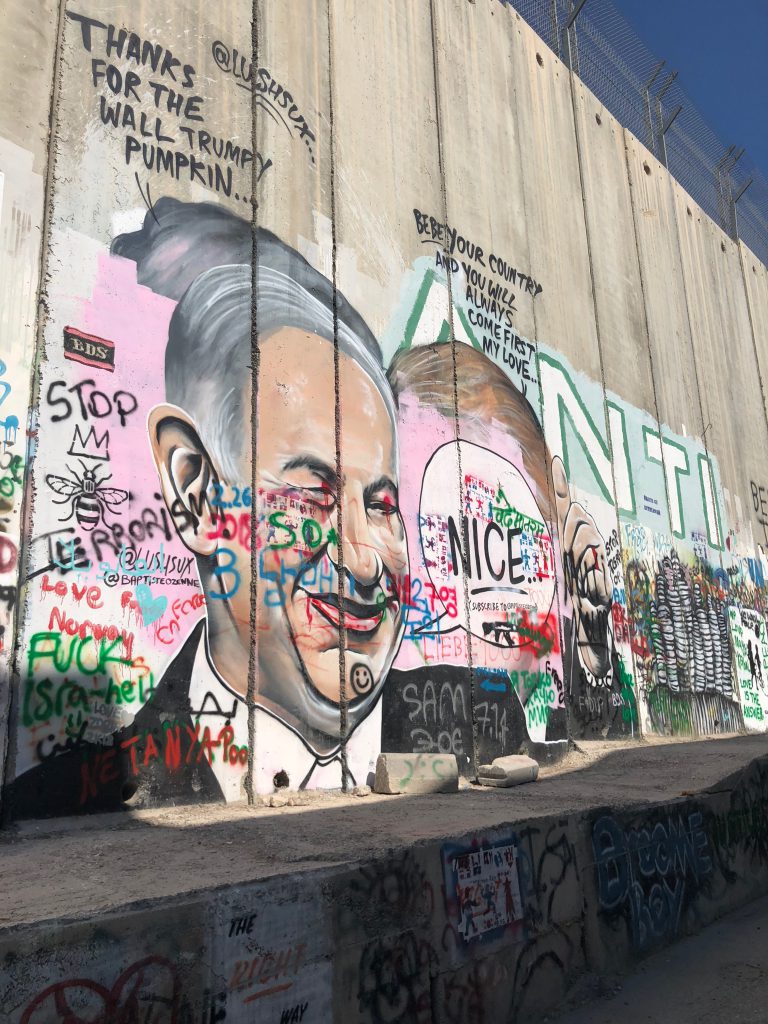 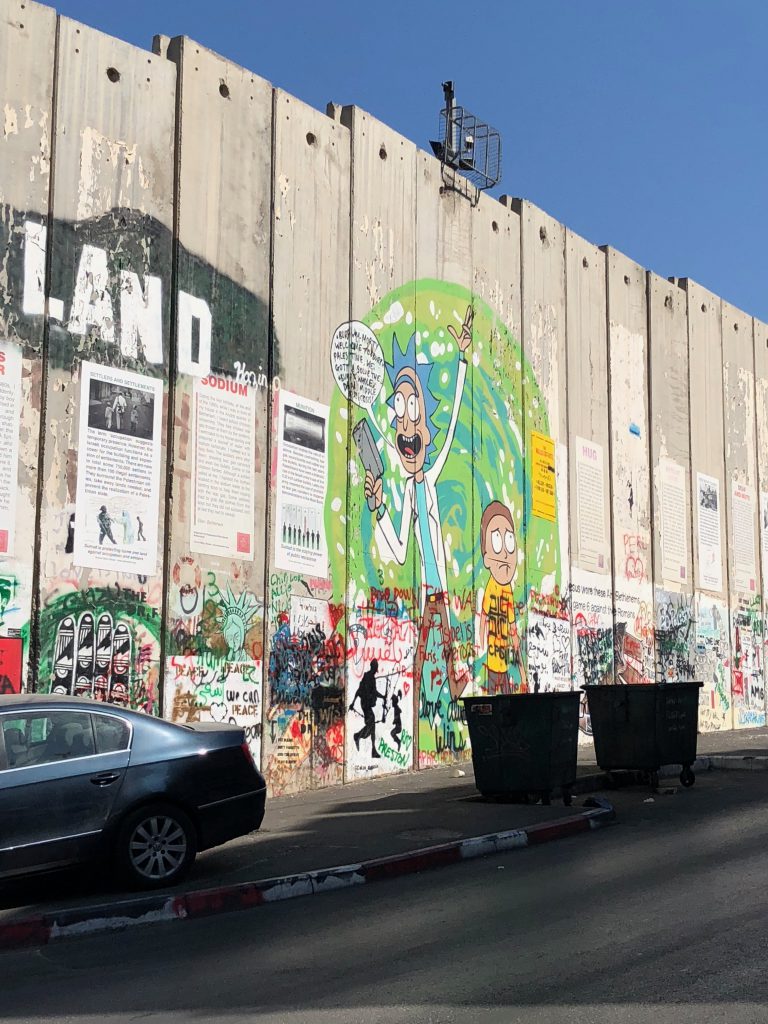 I continued to walk up and spotted the well-known face of Ahed Tamimi, the story of the young girl is well known in media just type her name into Google, the mural was painted by Jorit Agoch an Italian street artist. I am not going to lie this piece was absolutely stunning, the closer you are to it you see the inch of detail across the mural. 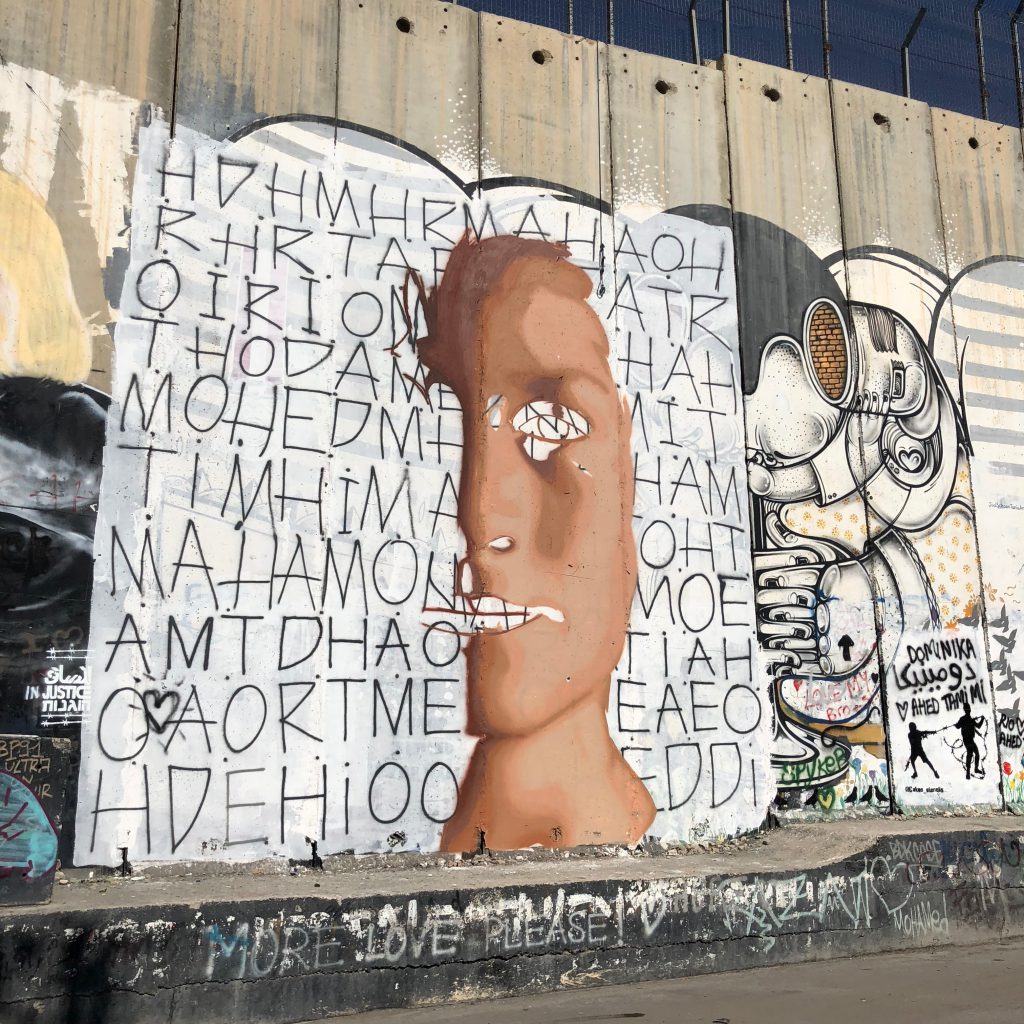 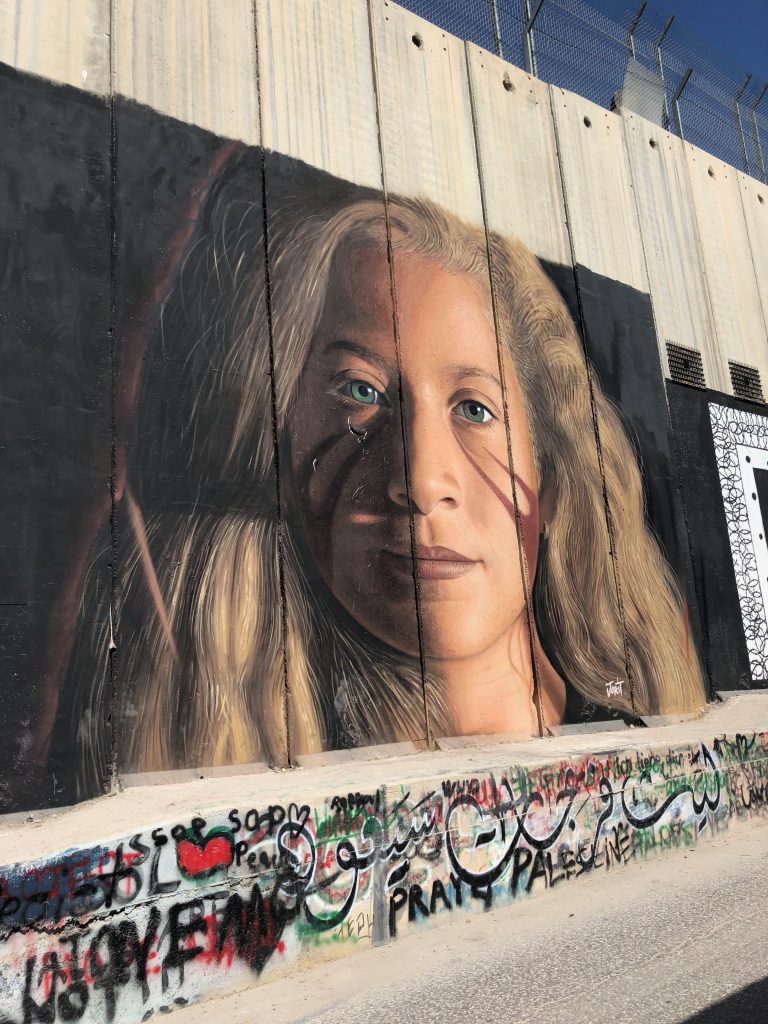 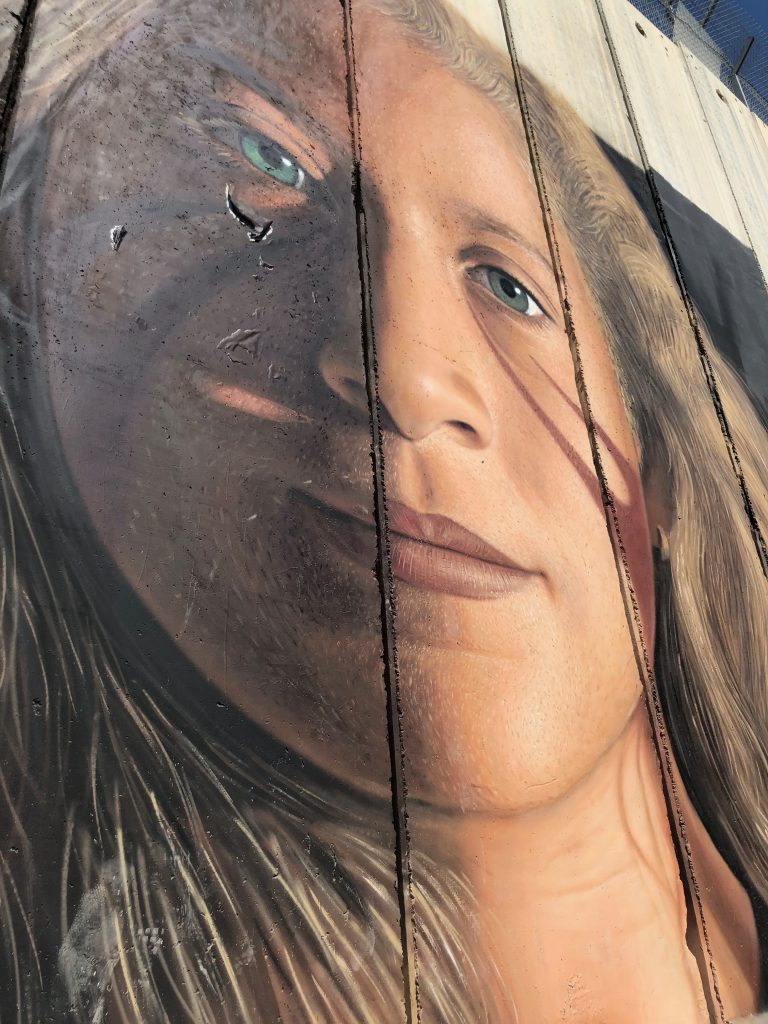 Every bit of art on the wall had an element of hope, support, love and empathy attached to it. With every stroke you could see that people while drawing were hoping to raise awareness for the plight of the people. 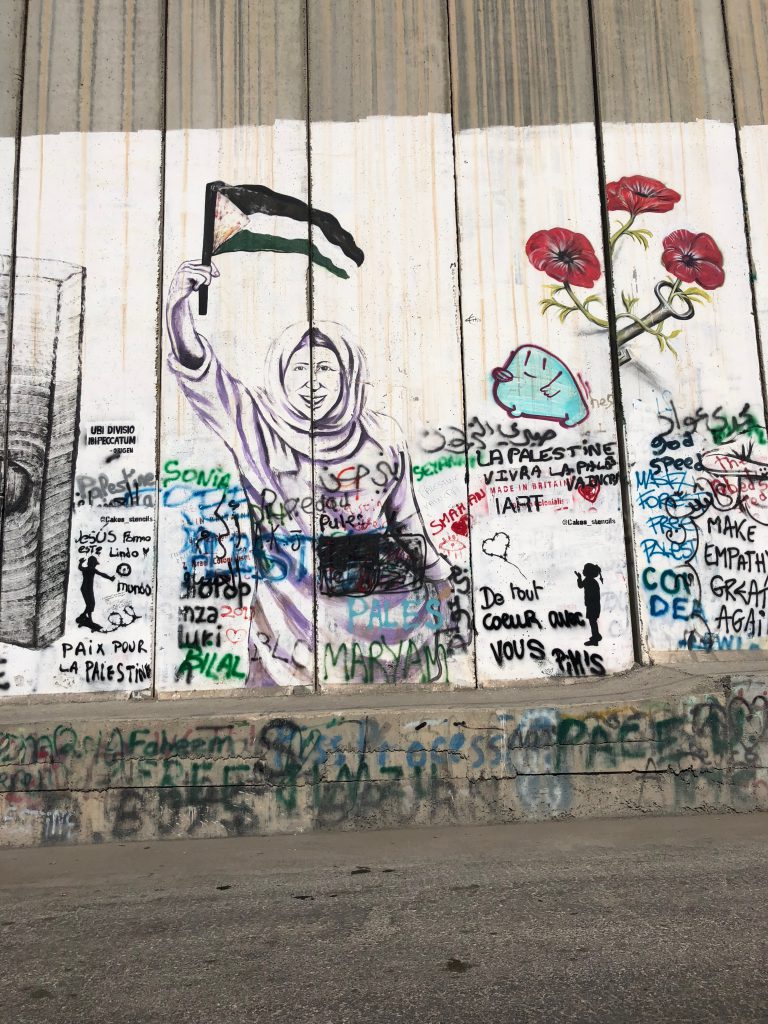 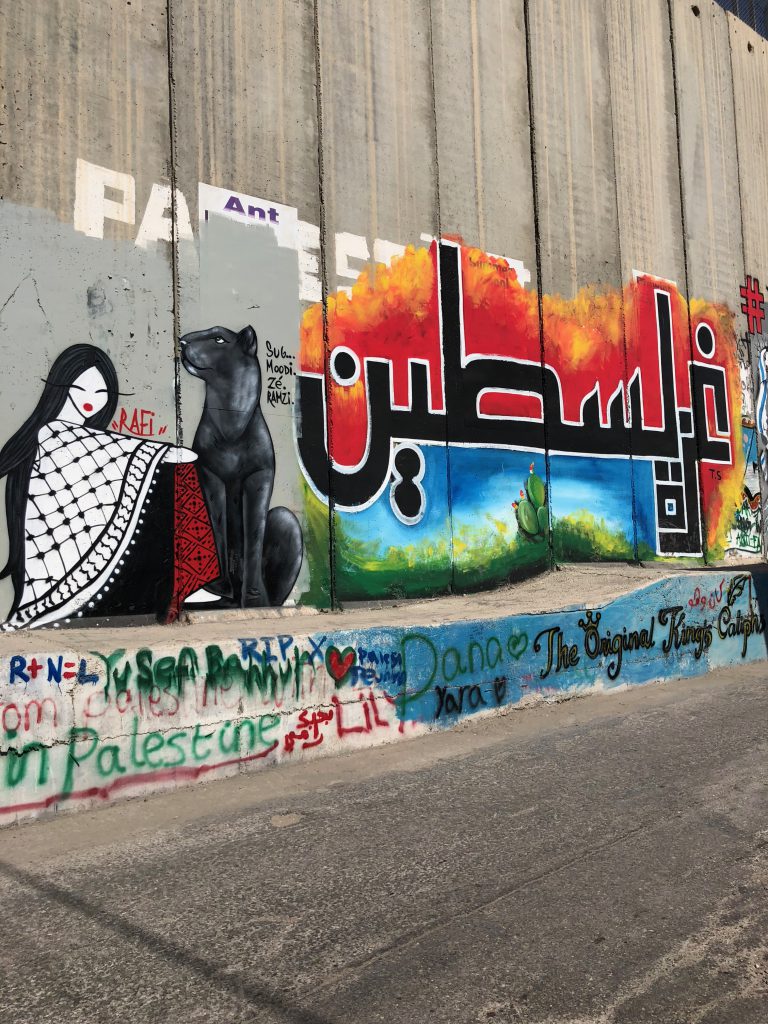 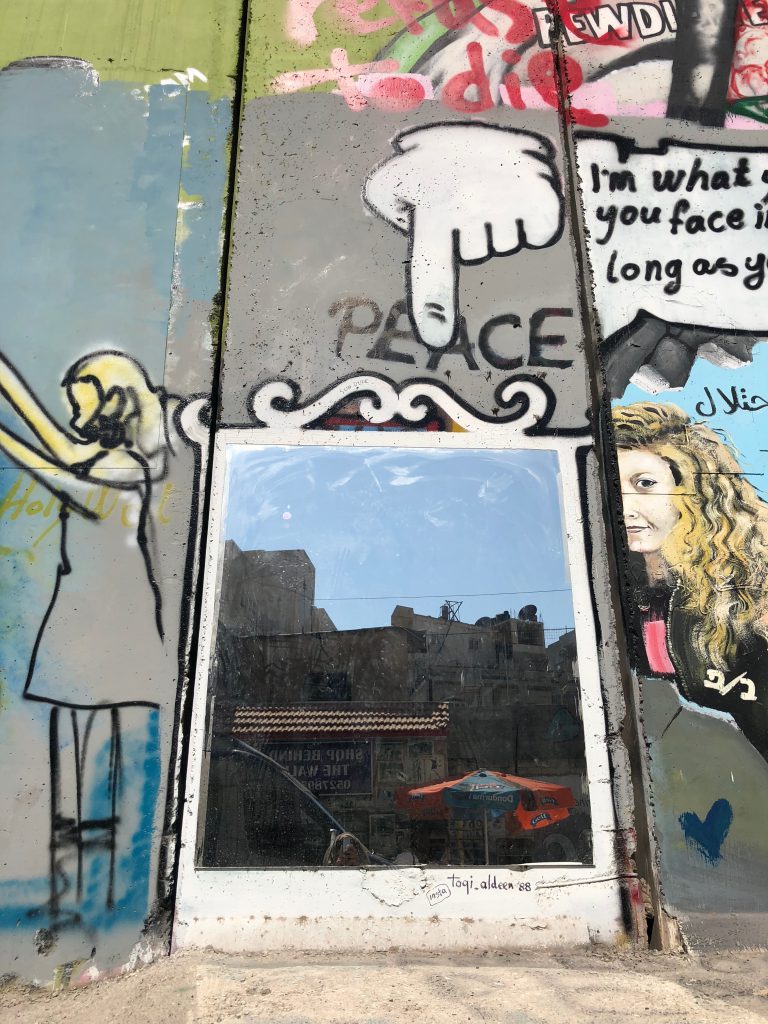 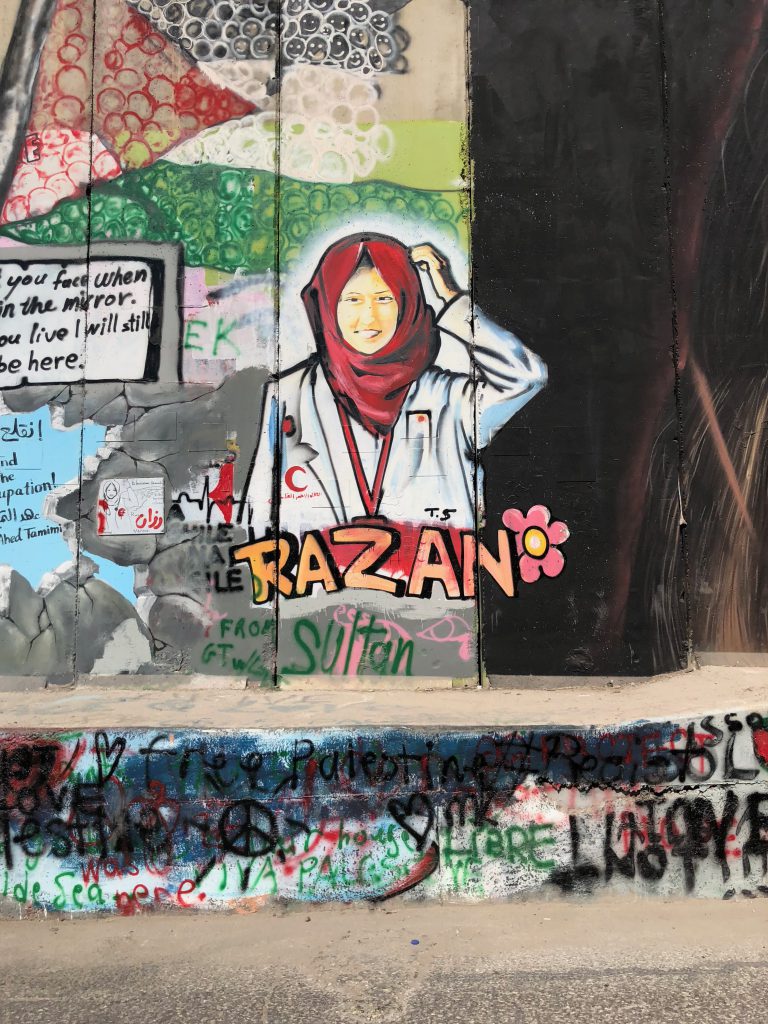 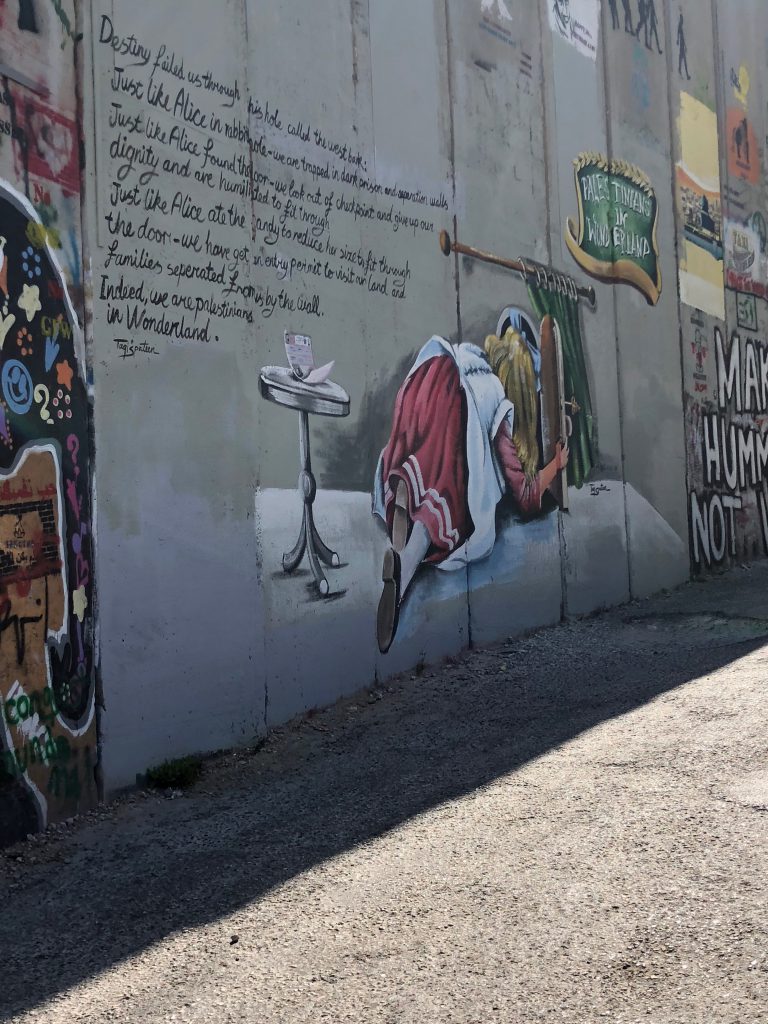 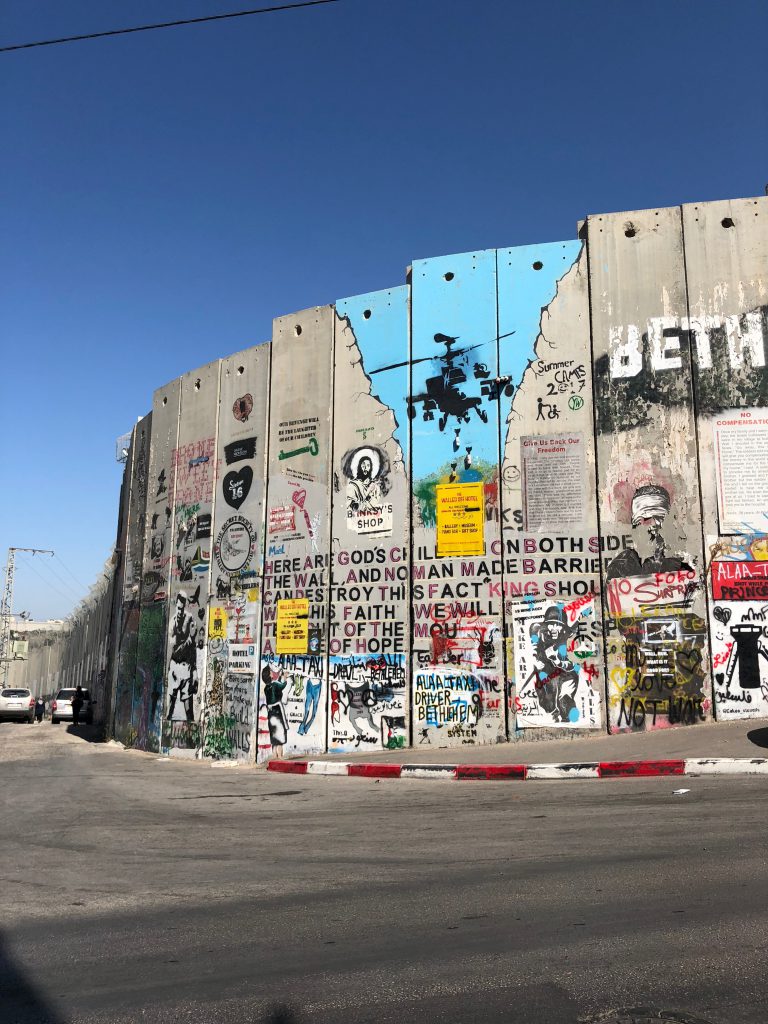 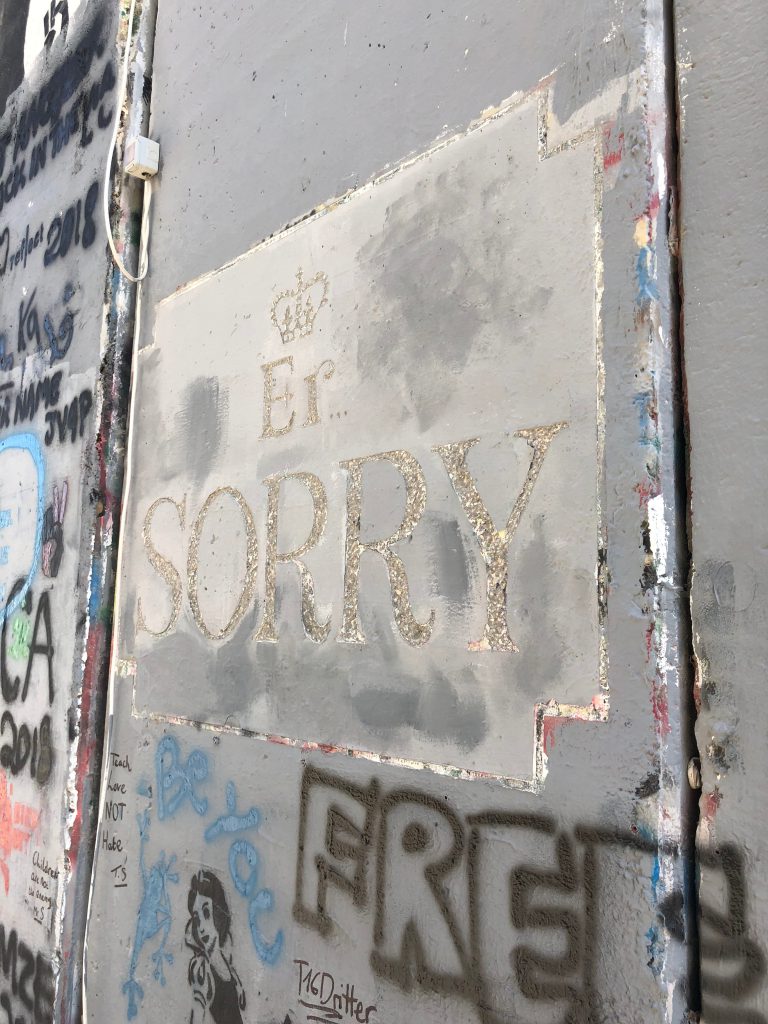 As you get to the top of the road you come across Banksy’s ‘The Walled-off Hotel’, just after the unofficial Banksy’s Shop. I popped in quickly to take a look around, the art was though provoking and a reality check, an eye-opener for those who disregard the reality or almost bury their heads in the sand and pretend no issues exist in the world just because they don’t have any. I won’t share any pictures of the inside with you. My advice is to go visit and see it for yourself, go visit Palestine, the people, find out the reality, read up on what happened, what is happening, and what may happen in the future. Don’t listen to the rhetoric fed to you but go and discover the story for yourself. Keep an open mind and open your eyes.

If you’re curious who I travelled with it was Zaarvel. You can read my blogs from my visits to Al-Aqsa here: